Are you sure you want to delete your account?

You have indicated you do not agree to our terms of use, do you wish to delete your account?

You will also be registered for the agent to contact you via other means you provide, with information relevant to your property search.

Firstly from all of us at Cape Verde Property I hope you are staying healthy.

This is a blog about a trip to Sal only 3 weeks ago on March 8th when I went for a week to visit the island and our Santa Maria office.

So much has changed in that time.

While I was in Sal everything seemed pretty normal. At least to start with.

This lovely island was the same as always. Chilled, sunny, friendly, beautiful......
except the fact that we were hand washing a lot more than normal… Anja who works in our office used to be a nurse and we were well stocked up with 96% alcohol hand wash.

My flight from Gatwick to Sal was packed. Totally full.

The weather in early March was spectacular. I hardly saw a cloud all week and the temperature was around 28/29C. Sometimes you might need a jumper or light jacket in the evenings in March however that week it was all shirts and shorts. 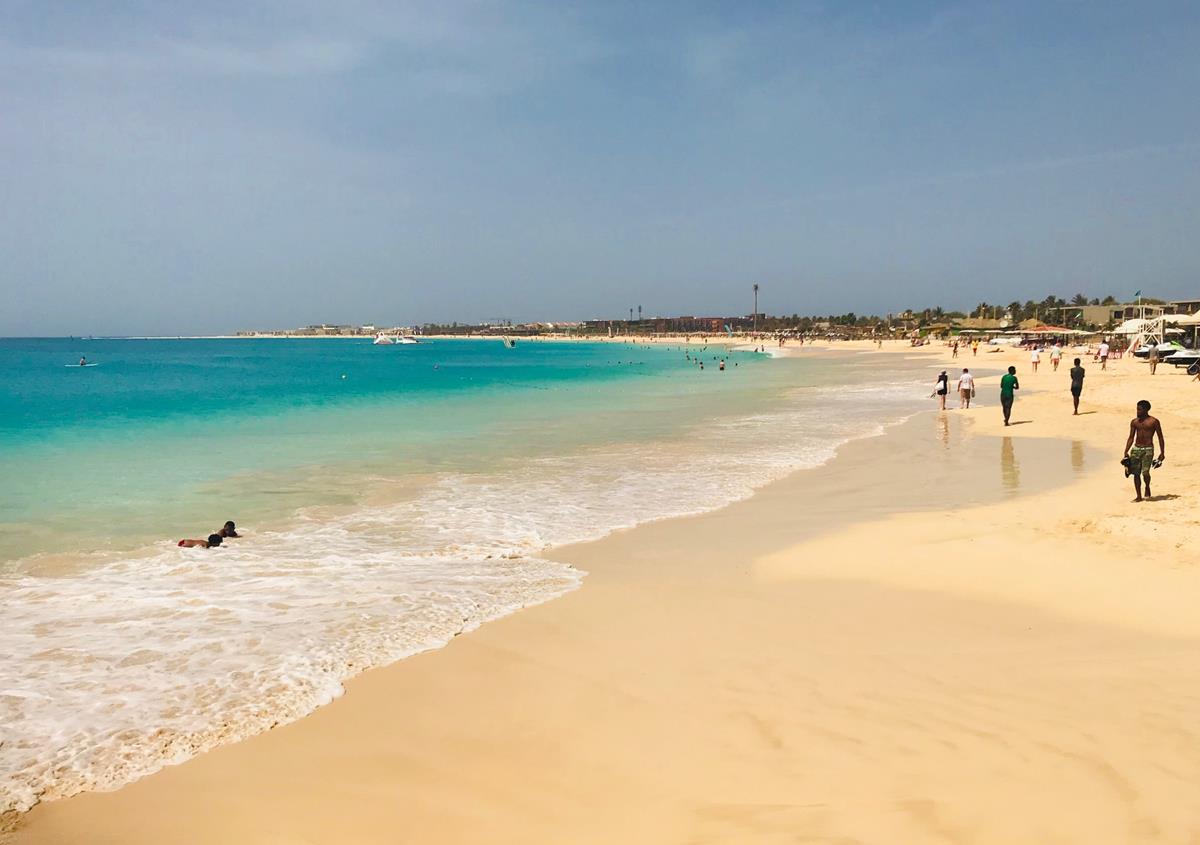 Lots of new restaurants opening. New businesses springing up. New hotels being built. There is the new RIU Palace Santa Maria going up really quickly on the western spit next to the New Horizons hotel, and a new Iberostar starting construction next to the Melia Tortuga and in the center of town by the pier the new Barcelo Hotel is all bordered off ready to start building. The new Robinson Club also opened in the past couple of months.

All are major new investments ready to increase the capacity for top quality hotel accommodation on the island.

The new Barcelo we are told is going to be a 400 bed hotel. It is located right by the fishing pier and on the world class Santa Maria beach a fabulous location and  really important for Santa Maria tourism going forwards. That amazing plot has been waiting to be developed for 15 years and it really should be a major influence of the development of Santa Maria. 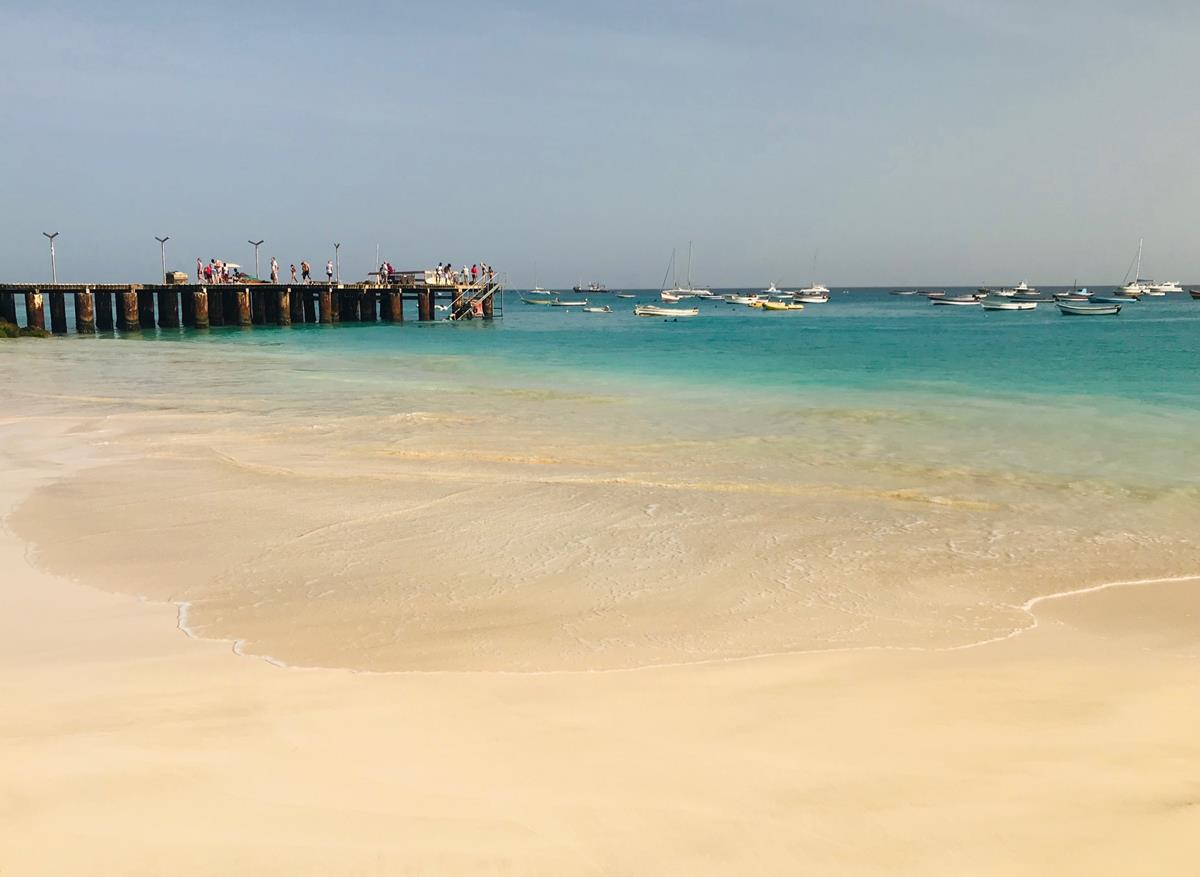 The old Sab Sab Hotel just past Angulo's and Columbus beach restaurants and the Leme Bedje Resort also has a fabulous project for a top quality hotel which will benefit that end of town and bring business along to the eastern portion of Santa Maria. The beach at Angulo's in the past few years lost some of its sand going into the sea....sand moves...however now the sand is back and its more popular than ever. A great area for windsurfing and chilling.... 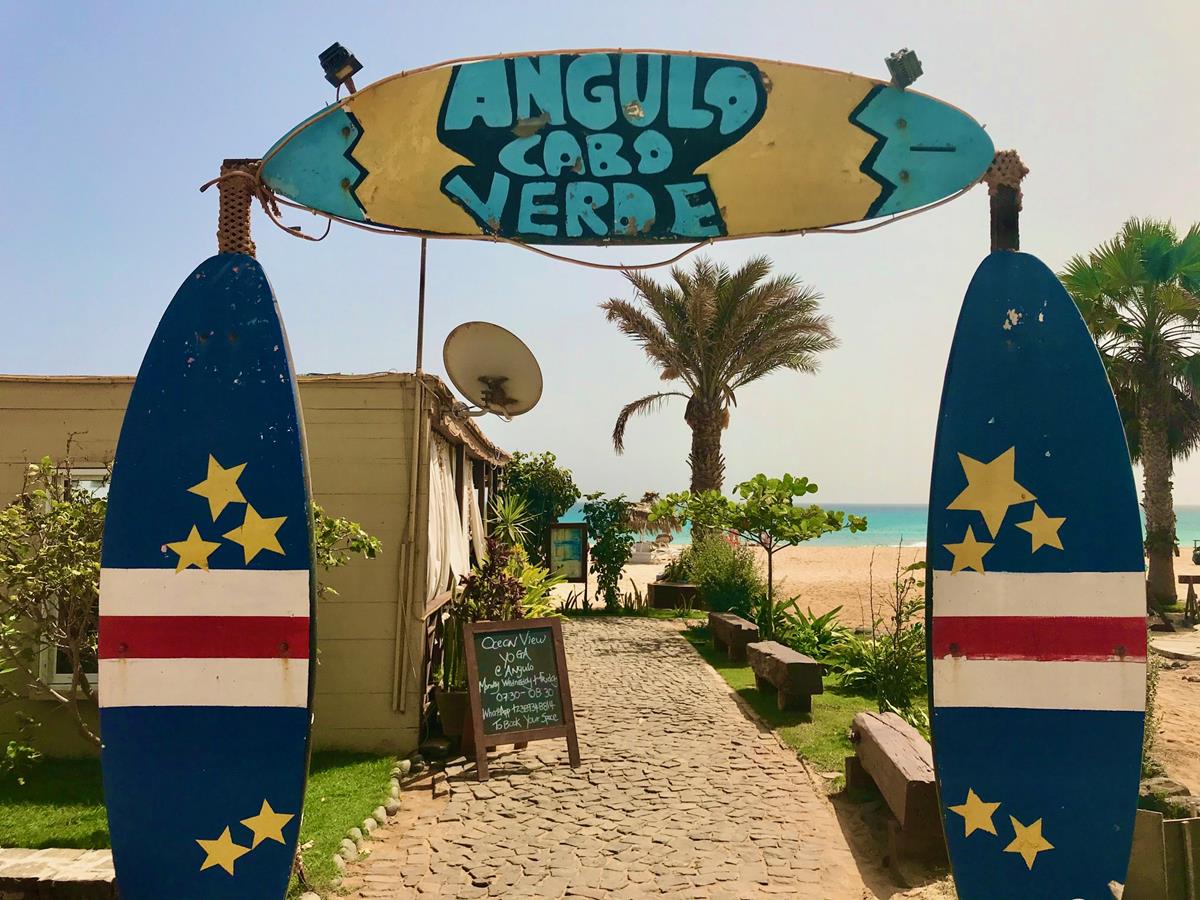 Leonel and Anja and Papis in our office were extremely busy the week I was there. Plenty of viewings and reservations. Its a busy time of year. All different nationalities. Mostly European however a couple of Cape Verdean expat Americans which may have been due to the new flights from Cabo Verde Airlines from Sal to the USA.

Some clients are after apartments or villas in the resort areas just outside Santa Maria, such as Vila Verde, Melia Tortuga, Melia Dunas or Paradise Beach. Others prefer the town in the smaller frontline resorts with pools such as Porto Antigo 1/2/3  or in Leme Bedje , where I normally stay.

Leme Bedje is in great shape now that Mark and Sarah have taken over the condominium management.
And of course there are small blocks of apartments in Santa Maria with resale properties. Sal has a wide range of fabulous opportunities from 5 bed front line villas to small studios or we also have large developer plots of land for millions or smaller plots for sale from 30k euros. 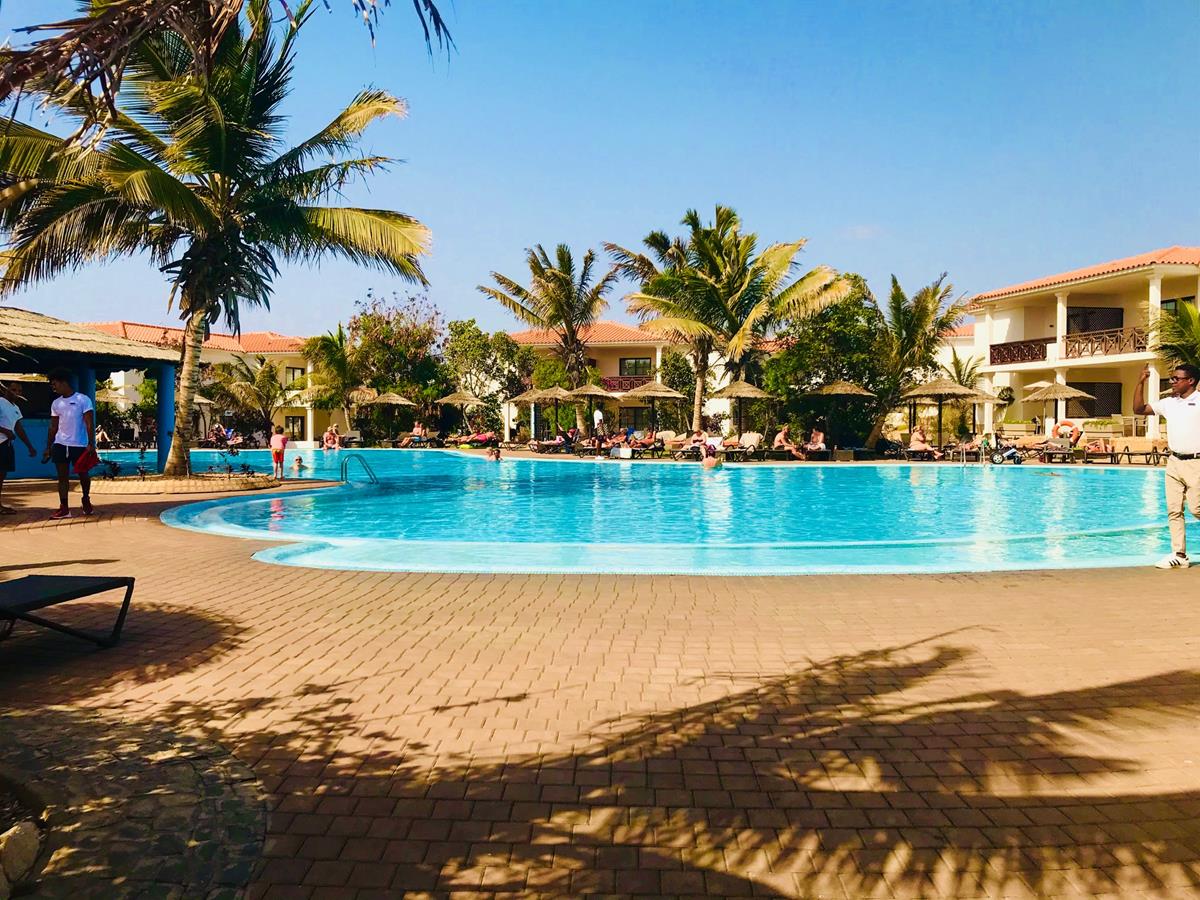 One rather unfortunate issue I came across very quickly in Sal when I arrived was that there was NO draft Strela beer in the bars… that’s right…there was absolutely NO draft Strela on the island at all. None. I don’t remember in 16 years the island ever being totally free of its local lager. There was Superbock in some bars like Legends and plenty of wine and bottles of beer to drink however Strela was nowhere to be seen…. In fact come to think of it I had less headaches in the mornings..… so maybe not such a bad thing.  (I was told there had made a dodgy batch of the local brew in Praia and were waiting or a new delivery).

We have a new car on the island. After about 12 years of gluing together our old Ford Ranger we have a new Renault Oroch, which in reality is a Dacia Duster pickup that you can't buy in the UK but is ideal for Cape Verde.
A nice little motor... even has aircon and a radio...luxury. As my week went on it became clear that the situation in Europe was deteriorating.

At the time Cape Verde still had no cases of Covid 19. TUI were still running flights as normal. Then on Saturday evening I was walking past the TUI office in Leme Bedje and I saw it was full with all of their staff in there for a unscheduled meeting…something was going to happen.

We wondered if they would stop flights…

My flight was on the Sunday the next day and that was apparently fine however things were rapidly changing.

So with as much social distancing as possible I went to the airport, checked in and we took off….

40 minutes into the flight there was a commotion on the flight deck and the hostesses rushed to the front of the plane and shut the curtain…with oxygen. Then the crew asked if there were any doctors on board. Luckily there were 3 junior doctors who looked a little worse the wear for drink who rushed to the front…
And then the head steward got on the microphone and announced that the pilot had BLACKED OUT!
But not to panic…we had a very good co pilot who would fly us back to Sal.
So back to Sal we went and when we landed with a rather large bump and a lot of reverse thrust there was a very loud burst of applause from all around.
All a bit scary but we were back to Sal safely. TUI eventually took us all down to the SalinaSea Hotel on the beach in Santa Maria where we were told that at 10 in the morning we would leave again for the airport.
I had never stayed in SalinaSea even though we have sold many suites there and actually have a couple of resales now, so for me it was a good opportunity to check it out. I was impressed. Fabulous location.

After 2 large gin and tonics and a couple of sandwiches I managed to get some sleep and after a good breakfast we all went to reception for the bus…to be told that 10 o’clock had moved to 11.45. And that the flight would go at 3.45.  Anyway I thought with everything that was going on TUI did as good a job as they could. 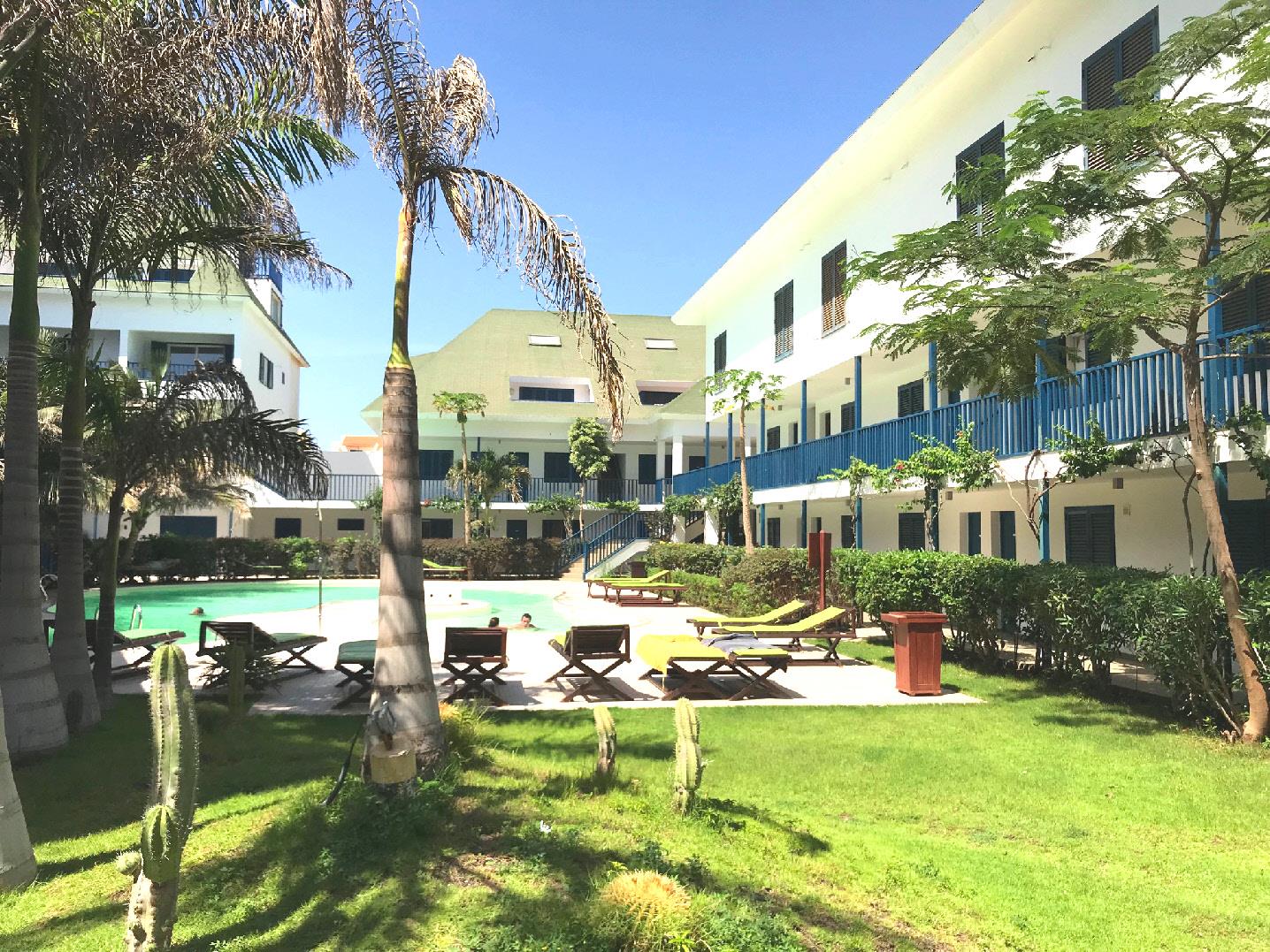 So I managed to get back to the UK and have since been isolating at home. Gatwick was absolutely packed when I arrived back, everyone seemed to be returning home at the same time...

Cape Verde is slowly going into lockdown. Still no cases of the virus on Sal as I write this however they have had 4 on Boa Vista where unfortunately a UK gentleman died… There are also a couple of cases on Santiago. Our thoughts are with all of them and their families.

All flights between islands have now been cancelled.

There are still expats on Sal. Many decided to stay rather than come back to Europe.

Santa Maria now is pretty much closed. The hotels are empty, the restaurants and shops are shutting, the streets are empty, the tourists gone for a while. Very strange and very sad to see.
The government seems to be reacting very quickly to keep the virus under control with all the relevant controls. There is a fund for hotel workers to keep their jobs and get 70% of their wages. Hopefully that will mean that they can get back to normal after this nightmare passes.

So at Cape Verde Property we are still working. We are still open for business. The Sal office may have to shut up shop for a time. We are not sure what the rules will be yet i the next few days. Obviously our main aim is the keep the staff in Sal safe. I’m sure that Anja and Leonel will be available online. I am working remotely.

If someone has a property they want to sell then please let me know, and if anyone wants to reserve a property then of course we can still do that. The notary is temporarily closed in Sal and the other islands, as you might expect, and the postal services are also shut so any purchases or sales will have to be slower than normal however reservations can still take place (and they are) and there are still many fabulous opportunities for the future.

Keep safe and best of luck to everyone in this very small world.